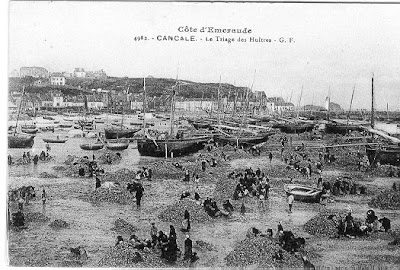 Cancale was known for its oysters from a very early point. It was close enough to Paris to sell its oysters to the capital delivered either via the sea and down the Seine or overland on big wheeled open wagons drawn by four horses. In 1545, Francis 1 rewarded the town with the title of “ville” in return for the privilege of supplying the royal court with oysters.

Before 1700, there was no shortage of oysters, even though restrictions on mussel harvesting had been brought in 20 years earlier. By the mid century the French navy was sent to investigate the sudden dearth of oysters and laid down precise regulations to be implemented by local bailiffs. There was to be no fishing in the summer from April 1 to October 15. The oyster fishermen themselves were to investigate and report back each year on which beds could be fished and which ones should be left, a decision to be decided by a vote of all the fishermen. Most importantly, and most well known, all the fishermen were to fish together and would leave port at a pre-arranged time in a “caravanne”.

By this husbanding, the oyster harvest revived and by the next century, 33 million oysters were being caught each year and by 1847 this figure had reached 56 million, from Cancale alone.
Posted by drew smith at 09:18