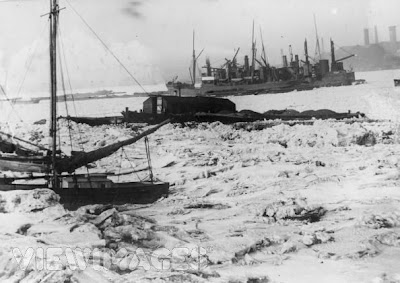 The great winters of the 20th century saw the Thames freezing and society folk skating on the ice. Beneath them the oysters died. A new unknown disease, called tellingly the Black Death spread from the sea into the river, destroying 20 per cent and 50 per cent of the oysters on the beds.

There were other factors too in the oyster decline. The dumping of 1,000 tons of TNT off the coast was dismissed by an official inquiry as being unconnected, but there were also more practical trading reason for the decline of the trade. Post war Europe was not the lucrative market it had been.

Despite these setbacks in the 1920s and 1930s the industry kept up a semblance of prosperity. Then nature intervened. The winters of 1929, 1940 and 1947 were so cold the Thames froze killing millions of oysters. The great tide of 1953 smothered the layings with mud. Finally the hard winter of 1963 killed 85 per cent of the prime stock in Pyefleet and 90 per cent in the Colne. The Essex oystermen’s annual general meeting of 1964 was cancelled due to lack of funds.

There were other factors too, notably the use of TBT (tri-butyl tin) to paint ship’s bottoms which killed oyster larvae and stunted growth. The government was pressured by the nascent yuppie yachting lobby to delay the introduction of the ban until many years after it was introduced in other countries, notably France and Canada. People who owned yachts it seems were a more important political lobby than the men who harvested the catch.

The native oyster was then attacked by a new disease, a parasitic protzoan bonamia which erupted in the 1980s and decimated stocks developing just as the oysters reached breeding age. It was especially virulent around the east coast beds. There have also been serious outbreaks in Ireland, France and New Zealand. Where it is fatal to an oyster, it is harmless to humans.