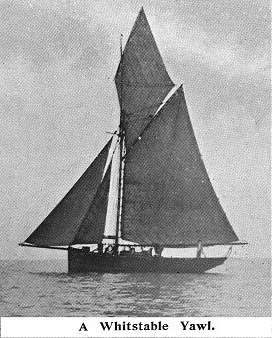 Wherever there are oysters, and indeed other kinds of shellfish, local patois invariably emerge. In the Thames it was smacks and creeks. In Whitsable the boats seem to have generically been called smacks, but these were usually of two kinds. There was the yawl which was the main boat for smuggling and for oystering which had a boomed mainsail, a topsail, foresail, and jib. Less numerous was a borley, distinguished from the yawl by her straight-cut stern like a rowing boat, and her boomless upright mainsail, which, let her sail closer to the shore but offered less canvas to the wind making her less manoeuvrable, and was usually preferred by shrimpers rather than oystermen. These boats were nimble and sailed square to the tide to dredge the oysters along with tide and wind, in contrast to trawlers that employed heavier gear. Trawling is a different skill, even with steam and engines.

Even after the advent of engines, yawl skippers often preferred working the tide with just sail. They would drift without a tiller and allow the dredge to skim the top of the oyster reef without breaking the foundations. If they went with the tide, then the catch rose up easily behind the boat, like taking the cream off the milk.
Posted by drew smith at 08:14