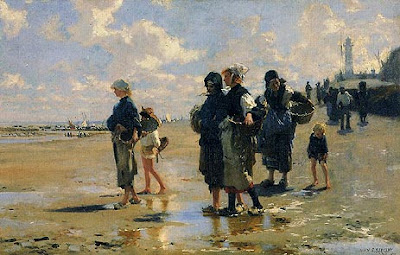 An early portrait by the precociously talented American ex patriate John Singer Sargent features the oyster beach at Cancale, in Brittany. Five women have been abandoned with two children while their men are presumably off fishing in Newfoundland, and they have been left alone with their baskets. Sargent was as adept as Cartier Bresson the photographer a century later in capturing what Bresson called the decisive moment. Here the grandmother is overlooking the little boy pulling his trousers up above his knees. The children are barefoot, the women wearing clogs. The lighthouse provides a solitary pencil thin solidity in a landscape of wisp and wind, a mention of danger and there is the suggestion too of a mast of a bigger ship across the bluff. Two of the younger women are gossiping, the other two are pointedly alone. Two have bare legs, the others are wearing stockings so maybe they are going to shuck rather than collect, or will split up for different tasks. The last girl seems petulant, hand on hip; the front woman looks resigned, sadly beautiful peering out to see looking for something. Perhaps in 1878 the boats were still facing a crisis, and the forlorn resigned mood that seems to hang on the women’s shoulders might be taken as one of despair that perhaps again that week there would be fewer oysters. Or wistfully and fearfully that their men might not return from the icy waters of the north Atlantic.

Sargent made his name as a portrait painter and is often remembered for coining the phrase “a portrait is a picture of a person with something wrong with their mouth”, but here none of the women are close enough to visualise their faces, even one little girl has her head obscured by a basket. The striking thing, now though perhaps not then, is that the tide is obviously going out but far from these women heading to a 21th century style beach picnic, they are arriving to work. The sun is shining but they wear shawls, scarves, rough aprons with ragged edges that could have been torn from sheets. Their formation is almost circular against a soft cloud and sand background, in outline suggestively of an oyster.