In defence of English cooking 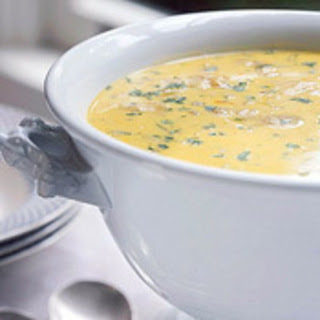 Escoffier credits England only with devil’s on horseback, oysters wrapped in bacon on skewers and dusted with breadcrumbs and cayenne. Larousse is more dismissive. It offers an austere if not unflattering view of the cooking of this time with a singular recipe for oyster sauce credited to England. It says it is to serve with grilled meats, meat pudding or grilled cod.

Stir six tablespoons of oyster liquor with twice as much light brown stock, butter and flour. Season very lightly, bring to the boil and cook for 10 minutes.
Strain, add 12 poached, de-bearded and sliced oysters, and a pinch of cayenne.

That the oysters had to be sliced at all suggests that larger oysters were sent to the kitchen, where the smaller ones would have been sold out on the shell. It is not too clear why the oysters had to be pre-poached at all and not just cooked in the stock which probably would have been just chicken or meat broth, although in an alternative version Larousse suggests you might use milk, and certainly a splash of cream would be a welcome addition of smoothness. Possibly that might have been the difference between a rural approach and an urban tactic, depending on how much milk was around. The recipe though seems to be clearly designed for taverns or very big houses where stock was readily made for soup.

But in fact early English cooking offers a better insight into cooking of earlier centuries and was more of an inspiration to people of the new world who would become more adept at cooking with oysters.
Posted by drew smith at 04:05