Smuggling and the black economy 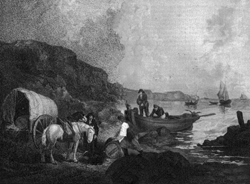 In the 1700s the Whitstable the smacks were fully engaged in smuggling. Oystermen willingly threw their boats into the illicit trade. Vicious hikes in taxes to pay for the wars in France had made commodities expensive and hard to find. Flushing in Holland (now Vlissingen in the Netherlands), Calais, Boulogne, Dieppe, Dunkirk, Nante, Lorient and Le Havre in France all were anxious to sell contraband to their southerly neighbour. The Channel Islands enjoyed unrestricted trade, and was used as a staging post until 1767 when the British government stepped in to claim its duties. The French responded by developing the then unknown and unfrequented port of Roscoff into a major depot to supply Devon and Cornwall. In a few years, the port was transformed from cottage settlements to commodious houses and large stores run often by immigrant English, Scots, Irish and Guernsey merchants.

The smugglers needed to carry small packages. They could not break large illegal quantities down in the ports where the customs could see them. They needed to distribute their goods quickly, a trade to which an oyster smack was familiar and well suited. And there was more money in it.

Some barely needed to sail across the Channel, but would use their sailing skills to hove close to a passing ship and take receipt of a few small cases of tobacco or rum or tea. Or they built rafts a few miles outside the estuary on to which they could stash the contraband, mark it with a blown up bladder and a feather and using their knowledge of the currents, let it drift unseen past the customs houses to be retrieved safely a few hours later at low tide.

On reaching Faversham in Kent, Daniel Defoe wrote in his Tour through the Whole Island of Great Britain in 1824-6:
“... I know nothing else this town is remarkable for, except the most notorious smuggling trade, carried on partly by the assistance of the Dutch, in their oyster boats....the people hereabouts are arrived to such proficiency, that they are grown monstrous rich by that wicked trade.”

Faversham grew fat on the skills of its oystermen and its shipbuilders, even if in part that wealth might have been delivered in the dead of night. But when the oyster harvest was plentiful they must have done very well. The Faversham oyster men ran the fishery as a monopoly between father and sons which dates back to at least as early as the town charter. In good years they earned good money as much of the local architecture can testify. In 1703 a wash of oysters could be sold for £3, and on a good trip a boat might bring back 120 wash . The Dutch paid top prices.

Where there was smuggling, there were oysters. The means for one was the means for the other. Oysters could also be the booty. George IV tried to pass a law that “any person that shall steal any oyster brood shall be deemed guilty of larceny. But in 1814 an Essex fisherman stole three gallons of oyster spat from Chichester harbour and re-laid them near Colchester. He refused to pay the £10 fine. On appeal the House of Lords dismissed the case on the grounds that “his purpose was not to destroy but to preserve”.

This was not the odd clandestine moonlight run, but a full blown black economy that had been flourishing for centuries. One Cherbourg house in 1768 was shipping 200 gallons of brandy a month on to English boats. If there was any danger of being caught the kegs were dropped over the side and marked with tubular lanterns to be retrieved later. Once on land the respectable Whitstable townsfolk showed no qualms about putting one over the revenue. The port was also busy with coal and many a coal cart had been adapted with a false bottom to move the contraband around inland. Tea was another prized contraband due to the high taxes it carried. Ostrich feathers were another lucrative trade. At times it was said there was so much illicit gin in Kent that villagers used it to clean their windows. Anything to outwit the customs was fine.

An often retold story, recalls how a gang of sailors realised that the English guinea coin was worth more in France than in England, 28 shillings against 21 shillings. They amassed a haul of 300 coins and set sail from Faversham but were intercepted by police. Quickly they stashed the coins in a pot of tar. The customs found no contraband on board and the men were freed but the ship was impounded for a year. Magistrates ordered it to be broken up and its contents sold. The crew reappeared at the auction and reclaimed their money with a token bid for a seemingly worthless pot of tar…and got their undiscovered guineas back.

Even in war, there would have been both camaraderie and closeness among the sailors, on both sides of the Channel and an easy familiarity with ways of trading with each other Allegiance had little to do with land based politics. Richard Platt in his informative www.smuggling.co.uk relates:

During the Napoleonic wars the enormous numbers of POWs put a considerable strain on the country's resources, and led to a vast prison building program (including Dartmoor). Many French prisoners lived in appalling conditions in prison hulks — filthy, overcrowded and disease-ridden vessels anchored off-shore. Through an elaborate network of contacts and safe havens, prisoners who succeeded in escaping from the hulks would be brought to London, then smuggled on a hoy or an oyster-boat to a timber platform at the low-tide mark near Whitstable.
This platform was a mooring for the oyster-boats and fishing vessels that were prevented from reaching the true shoreline at low-tide by the two-mile wide ribbon of mud that fringes the beaches here. Mingling with fishing folk and wildfowlers, the French escapees were able to make their way back to the shore, rest up and hide for a few days, then make a clandestine departure one dark night from Swalecliffe Rock — a shingle spit close to the Herne Bay road. Relatives of the wealthier prisoners would no doubt have paid handsomely for their safe return, and the arrangement no doubt suited the smugglers, who would otherwise have had to pay for their returning

An ingenious Cornish story tells how the landside smuggler would feed a rope down the town sewage pipes and float it out on the tide. When it appeared at the other end, his mate attached a parcel of contraband and then it could be hauled up into the main street, usually by the pub where it could be quickly sold and distributed. A variation on this same tale is told by a customs officer who intercepted such ropes at low tide and confiscated the booty, attaching a note saying: “The End is Nigh” and then hot footed it up to the main street to arrest the culprit as he hauled up his hoped-for contraband.

The remoteness of some of the oyster beds made them ideal for smuggling. Orford in Suffolk was patrolled twice a week by a customs and search officers from Aldeburgh. As late as 1856 one local ship's master observed that by timing his visit carefully, he could spend two days in Orford harbour unloading an incoming cargo — perhaps here wine — and loading a new one for export to the continent. The King's Head at Orford was used as a storehouse for goods run at Hollesley Bay. Symbollically, Hollesley is now a men’s open prison.

And inland oysters were already being taken long distances to Warwick and in Preston there was an Oyster and Parched Pea club established from 1771 to 1841. This was a small gathering originally of 12 Tories and the local school master who met for oysters, port and peas and apparently told each other ribald stories – too ribald for the Preston Gazette unfortunately to deem fit for publication after its demise. Presumably such routes also allowed for the contraband to slip easily across county borders.