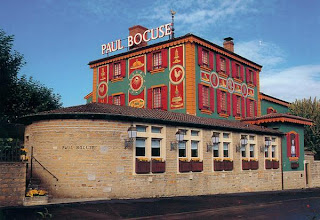 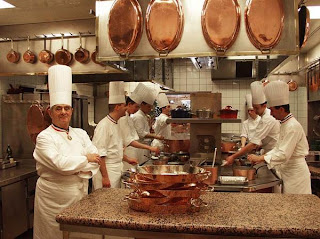 Paul Bocuse, the legendary and avuncular totem of La Cuisine Francaise, manages to evoke both the classicism of a vichyssoisse with the local slant of adding grated Gruyere at the end but retaining the complexity of texture with fried bread. There is more than a nod here to a Marseille style fish soup with its Gruyere, croutons and rouille. Lyons, of course, would have been able to pick any ingredient it wanted trading north or south along the Rhone, so this Lyonnaise variation may genuinely be a reflection of approaches long past.


Sweat three leeks in melted butter till soft, about seven minutes Add four peeled and cubed russet potatoes, mix well, cover with six cups of water and simmer 20 minutes. Set aside. Fry some cubed bread for croutons
Liquidise the soup. Add a cup of cream and a grating of nutmeg and return to the pan
Add a quart of shucked oysters and their liquor and poach till they curl.
Lay the soup up in warm bowls, top with croutons, a sprinkle of Gruyere, parsley and paprika. Spoon chowder into soup bowls; top each with a few croutons and sprinkle with Gruyére, parsley, and paprika. Serve with any additional croutons, cheese, and parsley on the side.
There are other recipes, not dissimilar where the leek, often a favoured pairing, and potato are used as a sauce to serve in the shell with the oysters laid back on top and grilled, though these do not seem as well thought out as the Bocuse soup
Posted by drew smith at 02:19