Cooking down the Thames 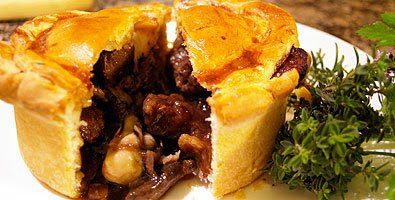 The oyster might often have ended up as part of a flamboyant display in medieval times for example with cabbage and fried larks; and fried frogs’ legs with oysters. Puddings too were typically made up with oysters. Suet pastry parcels were filled with blanched oysters, bacon, onion and parsley and steamed. The liquor from the oyster was mixed with chives and parsley and thickened with flour and butter to make a gravy. Steak and oyster pie can still be found. Looking back the pairing of meat and fish seems like a celebration of the end of fish days, or perhaps it was a ruse to circumvent the church’s dietary guidelines, an oyster pie might be acceptable if no one checked that it was garnished inside with beef.

Making a stuffing with oysters to cook with a chicken or other fowl was a common approach emanating from England and later adopted by the early settlers in Canada and America. Presumably, oyster with chicken would have been a special dish which may be why it is mentioned so often, not as today where the oysters would be the expensive ingredient but the other way round where the fowl was the prized centrepiece and the stuffing would have been a means of making the meal go further round the table. There are many recipes and variations, but this variation on what is almost an oyster hamburger, seems in tune with modern tastes.

Poach the oysters briefly in a minimum of water, pour the liquor over some bread to soak and chop the oysters. Brown some sausage meat in a pan and mix in the bread chopped onion, garlic and the giblets from the chicken. Saute 5 minutes, Take off the heat and fill the chicken to roast.

On fish days there might have been a simpler rendition of just oyster sausages, the oysters poached, then chopped with herbs and anchovies, mixed with egg and breadrumbs, suet or butter and seasoned with pepper or nutmeg or both, this mix then fried off by the spoonful.

Another approach which was also widely adopted by the Americans was the habit of scooping out the middle of a roll or a loaf of bread and filling it with a sometimes quite exotic mix of oysters poached in cream, ale or wine with sweetbreads or other small pieces of offal, butter and onions and baking it off in the oven. Rather like pasties and hotpots this may well have its origins in bakehouses and cookshops and would have been a good way for the baker to use up unsold loaves.

Before the railways oysters were pickled in jars, not just by the Dutch but notably at Poole in Dorset and at Swansea and exported often to Spain and Italy and also the West Indies. The practice still survives in Swansea and is sold out through pubs. This recipe hardly changed through the centuries or around the world, although in American versions they will sometimes add chilli or more Tabasco. The wine, vinegar and sherry should be preservative enough to keep out of the fridge and are further early signs of links between the smaller ports with France and Spain.

Simmer peppercorns, salt, mace, wine, vinegar, sherry, and Tabasco over low heat for 10 minutes. Remove and allow to cool. Shuck the oysters and put them, along with their liquor, into a sauté pan; simmer until they “begin to curl around the edges”. Put the cooked oysters into a quart container with a lid, then pour the cooled pickling sauce over. Cover
Posted by drew smith at 04:24