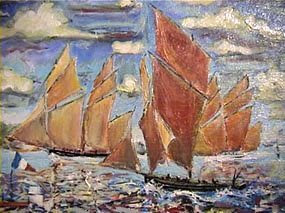 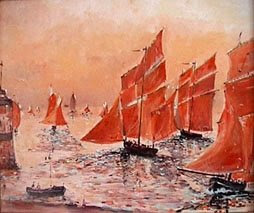 These paintings by Philippe Hulin are of Cancale's famous bisquines...
In other Cancale images, other women are shown a few metres down the beach. The oysters are piled high, stacked in neat wooden low pens. The women are bent over gathering and putting oysters in baskets. Obviously, these small parks like paddling pools, have been fixed in the sand so the oysters can be collected at low tide ready for market.

The people of Cancale symbolise a respected grit and toughness earned in the fearful fishing journeys the men would take to Newfoundland fishing for cod, leaving the town for months and passing on the oyster cultivation to the old men, women and children. As in other parts of Brittany, the rural poverty meant the coastal fishing was a crucial part of their history, survival and was tended with care. They built special flat bottomed boats to harvest the oysters. They had four huge sails, sometimes with as much as 300 square metres of canvas to grab the wind, called bisquines.

Cancale’s oyster shells have been uncovered in Rome; Louis XIV ordered them sent to his palace daily; Napoleon took them on the long march to Moscow.

The enormous tides – 14 metres – that sweep the bay below the Mont St Michel on the other side of the promontory from St Malo give the oysters from these beds their freshness and distinction.


The pre-history of this area must be among the oldest in Europe. From here came the Veneti and their boats; from here came France’s most famous cartoon character of Asterix; and here lie the oldest of megalithic stones; to here the west country Celts fled the persecution or cruel insociability of Anglo Saxons before the whole peninsular was engulfed in the totality of what is now France.