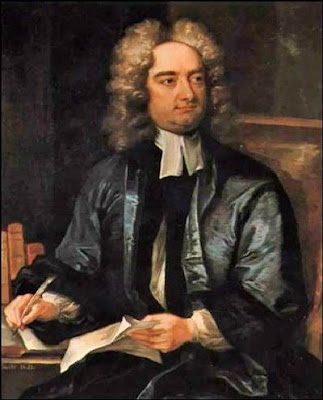 The Irish satirist Jonathan Swift is often credited with thinking up this thought in the 1700s.

“It was a bold man that first ate on oyster”

Swift was not short of clever one liners, but in this case he borrowed it from Thomas Fuller's Worthies of England which was published 40 years earlier in 1662 and attributed to James 1:

This in turn was also made a more poetic growl by John Gay:

The man had a sure palate cover’d o’er
With brass or steel, that on the rocky shore
First broke the oozy oyster’s pearly coat
And risqu’d the living morsel down his throat

Swift obviously overcame his own fear of oysters and went on to pen this poem by which time he was an enthusiastic convert.

Charming oysters I cry:
My masters, come buy,
So plump and so fresh,
So sweet is their flesh,
No Colchester oyster
Is sweeter and moister:
Your stomach they settle,
And rouse up your mettle:
They'll make you a dad
Of a lass or a lad;
And madam your wife
They'll please to the life;
Be she barren, be she old,
Be she slut, or be she scold,
Eat my oysters, and lie near her,
She'll be fruitful, never fear her.

In letters Swift went as far as passing on a recipe:

“Lord Masham made me go home with him to-night to eat boiled oysters. Take oysters, wash them clean; that is, wash their shells clean; then put your oysters into an earthen pot, with their hollow sides down, then put this pot into a great kettle with water, and so let them boil. Your oysters are boiled in their own liquor, and not mixed water.”
And eventually in Gulliver’s Travels he has his hero gathering oysters and limpets on the shore (which he eats raw for fear of lighting a fire that might attract attention) to conserve his provisions
Posted by drew smith at 08:33