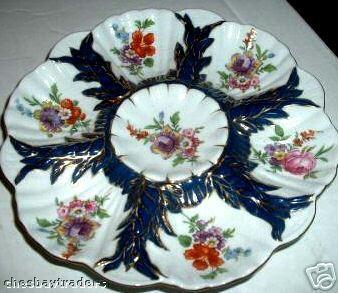 Another side phenomenon accompanied the rise of the oyster in urban dining…plates designed just for oysters. All the great French and German companies produced specialised, highly decorative plates, usually with six indentations for the oysters and a seventh for lemon or a sauce, with slight variations depending on whether the oysters were to be served on ice, in the shell or shucked. Those for ice alone are the oldest, superceded by those with indentations because they were less messy but also the rough shells scratched the delicate patterns and so these gave way to the small shapes, which could just take a single raw oyster out of the shell. Small two and three pronged forks were fashioned to bring the oyster into line with the new etiquette of the table. Originally such things were made for aristocratic chateaux but slowly the middle classes acquired the enthusiasm to have appropriate plates and cutlery.

Naturally the plates were decorated. Some of the most vibrant and rustic primitivism come from the oyster region of Quimper, more supremely elegant often floral and pale coloured from Limoges - above - , or more modern powerful abstracts from Provence as in Vallauris; artistic fish inspired shapes from the German manufactuer Waechtersbach; glass from Lalique and also some individual touches from Union Porcelain Works of Greenpoint, New York, in the late 1800s.

In England Doulton made two differently patterned with flowers around 1900; one of their former workers George Jones made a colourful set with large replica shells around the outside centred on a small egg cup divot in the centre for the condiment; and the smaller, later maker Samuel Lear produced a Portuguese inspired sunflower design.

Herbert Minton first introduced his vibrant lustrously glazed majolica at London’s Crystal Palace Exhibition in 1851. This made oyster plates affordable to the Victorian middle classes where porcelain and other fine china had been the concern only of the royal and grandest houses. His oyster plate design though he borrowed from Sevres in France.

The oyster plate still has its loyal devotees. There is an oyster society that collects plates at http://www.geocities.com/Heartland/Bluffs/1570/index.html; there was an online museum at www.oysterplate.com but this seems to have fallen by the wayside but the auction site www.ebay.com lists daily sales – more than six pages at the last look with 260 plates for trade. Some plates fetch prices upwards of $3,000 though most go for a fraction of that. Another source is www.tias.com with plates around $300. New designs can still sell for £175.
And, of course, there are essential books for the enthusiasts such as Collecting Oyster Plates by Jeffrey Snyder or the rival Oyster Plates by Jim & Vivian Karsnitz.

Predictably with oysters, even in the sedate world of plate making, controversy stalks, in this case the validity or otherwise of reproducing old designs. Collectors are appalled.