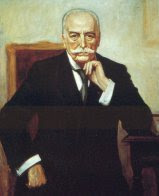 The oyster takes it place in the pantheon of French gastronomy, but as Graham Robb points out in his Discovery of France, French provincial cooking was not of any repute until the last century or until it got to Paris and was enobled by the huge brigades of the kitchens of the royal households and exported as the cuisine of royalty across Europe.

Escoffier, writing in 1907, only offers a dozen or so preparations (as against 30 or more for lobster) and none of them derive from the French provinces. He was typically extravagantly as in a puff pastry canapés filled with caviar and topped with an oyster as garnish. Lemon shrewdly goes with both. More recently, but from the same source, The Larousse Gastronomique rampantly pairs oysters with the full gamut of French sauces as if they were any other kind of fish and their main purpose was to glorify the cook’s true art of making sauces – Americaine (shellfish), Colbert (fried), Nantua (with crayfish), Normande (mushrooms and cream), Florentine (spinach), Mornay (cheese), Polonaise (horseradish), and also as a soufflés, gratinated, on skewers, in barquettes, in pastry cases, all of which reinforces the sense of glut and abundance inherited from an earlier era and an increased vocabulary.
Spinach is the most logical and usual accompaniment because of its supportive iron and any variation on egg, butter, and cream formed into an emulsion and cooked off in the shell under the grill has become a standard modern culinary shorthand.