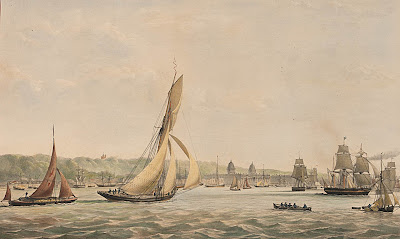 This lithograph by John Christian Schetky records the Vigilant after she had captured the barge Charlotte, which was trying to smuggle 14,400 lbs (7,000 kilos) of tobacco, in 1849. The Times said that this was probably the largest seizure on the Thames of tobacco in 30 years.
Later it reported:
Smuggling on the Thames
– At the county magistrate’s-office, Rochester, on Friday, William Woolf, John Stanley, William Warren, and two boys named French and Howe, were brought up in custody of Bines, at the instance of the board of Customs, having on the 18th inst. Been found at Cliff on board a certain vessel liable to forfeiture, having on board 14,402 lbs. of contraband tobacco. From the evidence of Captain Gowlland, Commander of the Vigilant revenue cutter, and James Clarke, the gunner, it appeared that about nine o’clock on the night of the 13th inst, while cruising off Sea Reach, in the lower Hope, near Gravesend, they observed a vessel coming up the river on the Kent side, and on hailing her were told she was the Charlotte,of Maldon, from the Burnham river. On boarding her they found straw loosely laid about abaft the mast, and on removing it and opening the hatches, they discovered in the hold of the vessel 20 casks containing no less than 278 bales of tobacco packed in canvass and along with cords ready for running, averaging about 50 lb. weight each. The crew were then made prisoners and put on board the cutter for safety, and with the vessel and cargo were afterwards brought to Rochester. The court convicted the whole of them in the penalty of £100 each. Recommending the two boys to the mercy of the Crown, but the penalties were not paid, and the prisoners were accordingly committed to Maidstone Gaol.
- The Times, London 6 February 1832
Posted by drew smith at 08:05