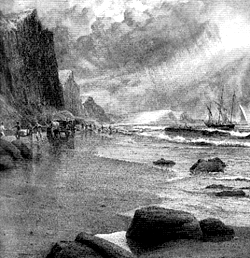 There is a fascinating insight into how these oyster people thought in a series of petitions to Parliament starting in 1718 at which time by all accounts the Dutch were still seen as both traders and villains. Their presence was hailed as an “invitation to smuggling and disorder”. The Dutch vessels had large wells where contraband could be hidden under a cargo of oysters.

The south coast dredgers complained that cheap imports were threatening their livelihoods. Foreign oysters they said were sold at “low rates and very cheap abroad. The trade they said was “unfair and fraudulent…to the great discouragement of your petitioners and to the prejudice, decay and ruin of our own fisheries”.

They pleaded: “The people employed would all be turned loose on the world...the building of small crafts will be cast aside...the crown will loose taxable revenues and government will lose its nursery of breeding up seamen for the service of the royal navy”

They estimated the 18 rivers of the Medway and the creeks of Essex employed nearly 4,000 men alone. Out of season they would sail around the coast looking for trade, spat and mischief.. “In this part of the trade ..many thousands of pounds are expended on the west and north parts of the kingdom for flesh, bread, drink and provisions and necessaries for the people”

The summer fishing of oyster boats was an established feature around the coasts. But beyond just trying to protect their own interests the fishermen often scurrilously accused their rivals of avoiding paying tax.


One Thomas Ellis was charged that in 1720 that he had brought a consignment of oysters from Cancale in France. He declared their value at £5 for customs at the quay but then sold them the same day for £61. And two years later one John Hoyfield did the same and sold them for £54.

The charge was eloquently made: “It is a well known thing that nowadays he who imports 1400 bushels, Kentish measure, if he thinks fit to make an entry, don’t, upon his oath report above 500 and sometimes 400 bushels as the whole of his cargo. And the different ways the entries are made up by the importers as by the bushel, the wash, the thousand and the basket are contrivances to conceal the true quantities and carry on the juggle of avoiding the proper duty.”

The oyster cargo was often just a front for bringing in brandy, oysters making a useful heavy covering for contraband beneath. The captains argued that they could not tell if the oysters were dead or not and could not predict how many might get to market so it was right to under-declare. The customs officer complained that even where they suspected skulduggery, they could not impound a boatload of oysters because they were just too big and he would have nowhere to put them or keep them. Or that the oysters would die and be worth nothing.

At the bottom of the issues was the acrimony between Essex and Kent oystermen. The Essex side complained that: “In Kent for the most of them being poor, unruly and incorrigible and violating all orders in dredging on the set grounds at prohibited times...plenty are overgrown with ouse and nothing but muscles where formerly were oysters”.

In 1725 a raiding party from Whitstable crossed the Thames and made off with thousands of newly laid oysters off Southend.

The Essex cartel revealed that they had only started to go to Cancale in France to get their oysters because the Kent fisheries had refused to supply them. In return the Kent dredgers were disparaging in their testimony as far as the oysters were concerned:

The French oysters themselves were unusual and came to be known as Whiteshell, which may well have been another ruse to discredit the Essex importers. They were only sold by the “meanest of retailers” and those that do “disfigure them to disguise them”.

They were usually brought over in March and sold out quickly in August or earlier before the native market opened. They grew very quickly, which it was said meant they were all shell and no meat.

Eventually in 1737 Parliament decreed a levy of 2/2d a bushel on imported oysters as duty, but ironically the winter of 1739 saw a huge frost. The boats were frozen in harbour for three months and most of the oysters died, so the patriotic protectionism had proved futile.

Hector Bolitho reports a more stable imagery of 14 hoys at Whitsable carrying 1,000 bushels each which might have been as many as 160,000 oysters “constantly going to and and fro in the Whitstable happy fishers cartrying trade” ewatched over by binoculars by a “sodden” inspector. Later they would all meet in the Duke of Cumblerand pub where the proceeds were divided up by the water council.

But there was one boon to the Cancale trade and one that shows that 100 years before anyone else is credited ‘officially’ with starting oyster culturing and on a parallel line with the Japanese, the French and English were already more advanced. Orc’s original beds at Abbotsbury in Dorset had died out from a mix of neglect, desease and marauding but in 1743 the enterprising Captain Lysle bought 30 tons of seed oysters from Cancale in France, for £50/6s/6d, and planted them in the lagoon near Wyke. Lysle obviously had an understanding of what he was doing and laid the foundations for a business that flourished into the 20th century. The Fleet even gets an ironic literary mention in the opening paragraph of J. Mead Falkner’s smuggling adventure Moonfleet:

"The lake is good for nothing except sea fowl, herons, and oysters...".

However well regarded in literary terms, the reputation of the Fleet oyster – and Dorset oysters are often mentioned and presumably were from here or Poole – survived until 1880 and the building of the Ferrybidge Fever Isolation Hospital which coincided with their disappearance for another century.
Posted by drew smith at 08:01