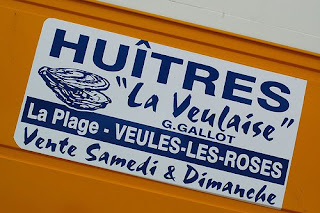 Normandy produces a quarter of the French oyster harvest, from the bay of Vers which includes the Huitres d’Isigny where they are by association trying to link up with the reputation of the local cream and butter; the oldest beds at Saint Vaast la Hougue, open sea at Cotentin, and newer beds at Meuvaines-Asnelles.

North Brittany’s coastline of teeth like rocks, deep ravines, deeper estuaries and exposure to the rolling Atlantic has meant that through centuries the Bretons have fostered their oysters carefully. Here is Cancale, nestling behind St Malo overseeing its beds in the Bay of Mont St Michel, then the Bay of St Brieuc and round to Brest, Quimper, Quiberon, Morbihan each one more exposed than the next to the pure Atlantic plankton that feed in the protected and sheltered bays where it is stable enough for an oyster to gain ground.

Further south the oysters are tended in the shallow waters at the mouth of the Loire at the Bay of Bougneuf and enclosed by the peninsular of Noirmoutier. Since 1992 they have been collectively marketed as oysters of Vendée-Atlantique.
Posted by drew smith at 01:38