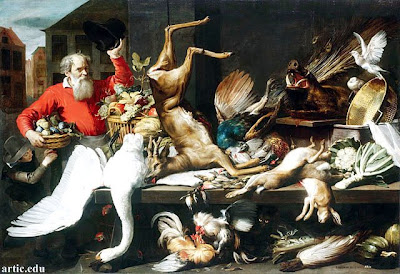 There is symbolism afoot here in the selection of so many items, but most overtly it is in the Dutch word vogelen meaning “to bird” which can also mean to have sex. The oysters below are strategially placed out of scale beneath the woman,
Snyders did other still lifes, like this one above in similar style with many ingredients and one he called his studio which is a table laden with fish and meats ready mot to eat but to paint. The roebuck has been pointedly eviscerated from the groin and hung with its legs exposed almost like a pornographer.
Posted by drew smith at 09:53