The deadly sweep of bonomia 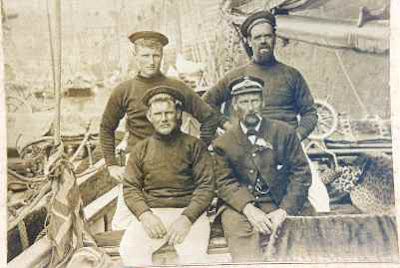 This early photograph is of a Whitstable crew around 1860 of a Captain Alfred Gambrelli.

Bonomia was first seen in northern Brittany in 1979, then the Netherlands, Spain and Ireland. It is thought it may have been imported from a laboratory in California where they called it Microcell Disease because the symptoms could only be seen with a microscope. It does not just kill the oysters bit infects the beds making them sterile.

The native Essex oyster was diseased or deceased, or hopefully is in hibernation to return miraculously at some point in the future. Most oysters sold in Colchester since have been imported. Maldon is still the biggest oyster beds in the south, but today these are mostly Pacifics (which has not stopped the poaching, these days often using scuba gear) with only a few surviving natives, which can still be found at the Shed among the boats at West Mersea beach. A native oyster today will likely have been spawned in the clean waters of Loch Ryan in Sotland and only brought to Essex for the last months of its life.

On the other side of the water, the Whitstable Royal Oyster Fishery Company had not made a profit since 1928. At the annual general meeting in 1975 it was revealed that it had debts of £40,000 and owned equipment worth £342, a fallen down warehouse and a couple of beach huts.

At Faversham the beds were ruined by the effluent upstream from a paper mill.

At Helford in Cornwall after careful husbandry since the 1920s, the entire stock of 8 million oysters was wiped out in the early 1980s by the arrival of bonomia.

The Solent has the greatest natural surviving southern resource of native oysters – which in Mayhew’s time were called Miltons and were far too prized to ever be sold on a London street - but these are mostly the subject of research and the trade is still small. These deeper beds have stayed free of bonomia but the boats have to fight for space alongside hugely expanded yachting interests and massive oil tankers that ply over the same beds. Here there are four tides a day which makes it ideal for raising oysters, but also ideal for running an efficient yachting harbour. Historically the beds date back to Roman times, and possibly the Romans even started cultivation here, but they have never been developed in the same way as the Thames beds, probably because there was not the market locally for them or has not been in living memory.