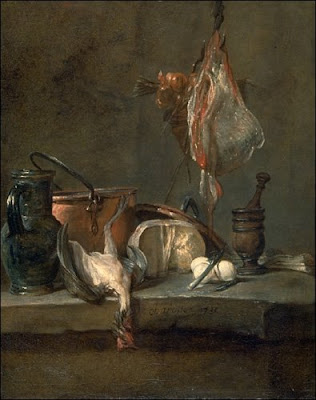 The kitchen still life was also popularised by the French painter, Jean-Baptiste-Simeon Chardin. Probably his most famous painting was also of his first, Still-Life with Ray Fish (1728). This painting alone, with its gutted stingray hung from the stone wall in the background, its raw fish and oysters, numerous jugs, bottles, and other kitchen utensils arranged informally on a white tablecloth which partially covers a stone slab, won him instant acclaim as a painter and membership in the French Academy. Like Peeters, off to one side, a hungry house cat greedily eyes the impromptu feast. In other variations, also using the ray, the oysters are mysteriously missing.
Posted by drew smith at 10:31