The coming of the trains 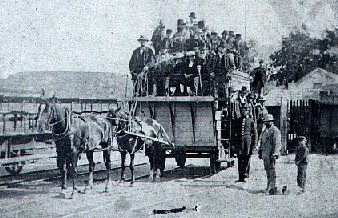 Two events in the 1800s indelibly changed the English oyster industry and the way of life on the shore. Both might have seemed great technological advances to impoverished seaside communities but were to prove disastrous from the point of view of the oyster and some seaside communities.

It was the railways that really transferred power from the sea to the land.

And the railways arrived in some cases came right up to the dockside. Oyster gathering became industrialised. Before the railways, and later roads, communities were disparate, individual, often poor and isolated. The local beds could sustain and replenish a small community and would naturally restock with only a minimum of husbandry. Even trade with the big cities of London, Southampton, Bristol, Glasgow and Edinburgh would usually have been by boat and so was regulated to an extent by the oystermen themselves. The railways bestowed a land based order and organisation that was to destroy the influence of the watermen and the waters forever.

Suddenly vast quantities of oysters could be harvested and sent directly inland to emerging urban markets. In the same way that the galleons, straight roads and organised trade routes had allowed the Romans to enjoy oysters across their empire, so again here was a push and pulley mechanism to haul huge numbers of oysters and transport them swiftly to expanding cities.

The railways rewrote the economic and social landscape. They brought a plan for urbanisation where before there had been parochial rural agricultural markets and near independent anarchy and smuggling on the coast. New cities were designated where others would be bypassed. In turn the railways brought them more trade and more people. The fishing coves were naturally to be included in the new networks as a valued source of supply.

Swansea was chosen as a destination for the first passenger railway in 1817 which made it briefly a resort of high fashion for the gentry, Bath by the sea, it was called, although the real reason would have been for trading its oysters, its coal, copper, iron, tin and zinc and for its shipping trade with the rest of the world. Here all the values associated with oysters that would have been valued back into the Neolithic could be industrialised, plundered and rationalised. The modern world began. Around the globe the city had become an important trading port and was nicknamed Copperolis. Its coal also fed Swansea's metal smelting works and it supplied a huge export industry in its own right.

In the 17th century oyster dredging in Swansea was still being performed with row boats, but after the railway arrived they were rigged and known as skiffs. A dredge was fitted underneath on all 180 boats working the bay. Each skiff had a crew of three, two men hauling the nets while a boy steered.

It was the roaming Essex boats that showed the Welshmen how to develop their oyster beds. Special boats were built in Bristol which came to be know as Mumble Bees. At one time 600 people were employed in the Welsh oyster industry. In 1871, 10 million oysters were scraped off the sea beds of Swansea Bay and the Gower.

The railway was a large, rapacious and hungry vehicle as were the city markets it supplied. It could suck millions of oysters from the sea to market in a few days. Yes there was boom, but there would be bust too. No natural resource could meet its insatiable uncontrolled mechanical demands. Oysters were mined like coal. And in law there was no protection.


The numbers of people employed soared. At Whitstable in 1793, 36 people formed the original company, but by 1866 it had 408 members, of which more than 300 were working. At Colne 73 people were registered in 1807 but over 400 fifty years later. These figures were probably for boat owners because in other documents 2500 dredgemen are mentioned in Essex waters around 1836, and the Colne fisheries in 1844 had 500 boats and employed 2,000 men, so for sure many more worked in and around the trade.
Posted by drew smith at 02:44