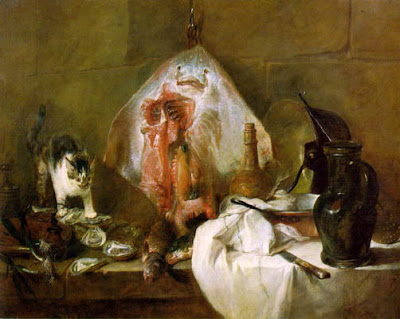 This is an altogether better print of Chardin's classic...it is in the Louvre at Paris. The cat is about to... well this is by Marcel Proust:

"On the table the working knives, which go straight to their targets, repose in menacing but inoffensive idleness. But above you hangs a strange monster, still fresh like the sea through which it undulated, a ray-fish, the sight of which combines, with gluttonous desire, the curious attraction of the sea, in calm or in storm, of which it was once the fearsome witness, causing as it were a memory from the Zoo to pass through a flavour from a restaurant. It has been laid open and you can admire the beauty of its huge yet delicate architecture, tinged with red blood, with blue nerves and with white muscles, like the nave of a polychrome cathedral. Next to it, in the abandon of their death, fish are coiled, in a stiff and despairing curve, face down, their eyes bulging. Then a cat, superimposing the obscure life of its knowing and more conscious forms on this aquarium, the brilliance of its gaze fixed on the ray-fish, manoeuvres the velvet of its paws with slow haste over the unpraised oysters, revealing both the prudence of its character, the covetousness of its palate and the temerity of its undertaking. The eye, which loves to play with the other senses and to reconstitute, with the help of a few colours, more than a whole past, a whole future, can already sense the freshness of the oysters that will wet the cat's paws and one can already hear, at the moment when this precarious pile of fragile mother-of-pearl gives beneath the weight of the cat, the faint cry of their splitting and the thunder of their fall."