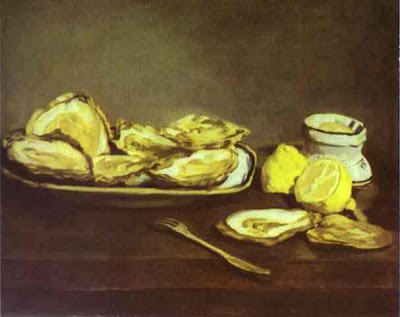 Oysters, one of Manet’s earliest still lifes, was reportedly painted for his fiancée and remained with them in the family home. The simple subject and thick application of paint show the direct influence from Chardin, as explained elegantly in this piece of anonymous but admirably bracing catalogue art criticsm:

“The heavy yellow paint puckers in imitation of the lemons’ pebbly skins, while the wet surface of the cut fruit is smooth and flat, sectioned by a few spare strokes. The oysters, plump and slick from a distance, appear upon closer inspection to be formed by a few swift undulations of a brush laden with thick paint. This work from the early 1860s reveals Manet’s developing style. Sudden transitions of colour within a limited range—not a continuous and gradual modulation of tone—give shape to his objects. Each colour, each brushstroke, stands independently on the canvas; it is in our eye that they blend to create form.”
Posted by drew smith at 10:33